As a medium, video has the inherent power to tell a story in imaginative and captivating ways, blending scripts and copy with audio, compelling visuals, sound effects and soundtrack. The broadcast news discovered this a long time ago. As news publishers made their own inroads into the digital space, they also began to leverage video as an engaging way to tell stories and cover the news online and through mobile apps.

But video can also be a source of revenue for news outlets. Mike Martoccia, vice president of digital at Adams Publishing Group (APG), encourages his industry peers to think about video in a new way and create a “video monetization strategy”.

APG has done precisely that, leveraging the talent and resources already within the organization’s agency to create marketing videos for clients who may or may not be advertisers with their news headlines.

Martoccia explained: “It is a strategic solution that we offer to companies of all sizes, but more particularly to small and medium-sized companies. We find that they are the ones who don’t have a strategic approach to video or storytelling for their products and services, and they probably need the help the most.

Founded in 2004, Vimeo is a platform dedicated to helping customers create, collaborate and distribute video content, including digital advertising. The company reports that around 350,000 new videos are created on its platform every day, from big brands like Coca-Cola, Hearst Media and Starbucks to small businesses and nonprofits. In 2021, the company made two strategic acquisitions, buying Wirewax and Wibbitz, adding artificial intelligence (AI)-based content creation and interactive video functionality to its toolset.

Caitland Conley, content strategist at Vimeo.com, claimed in a 2021 blog post that there are three types of videos every small business owner should make:

Video platform Lemonlight suggests “67 Video Marketing Stats You Need to Know for 2022,” in which the company draws some conclusions based on a 2021 marketing survey it conducted. The study gleaned that “76% of marketing teams surveyed have invested in video production over the past three years. Of these, 44% discussed in-house production; 28% hired a production company; and 23% hired a freelance assistant. »

“Video is a great way to tell the story of your product or service,” APG’s Martoccia confirmed.

It’s a message he’s “taken on the road” at recent industry conferences, but APG’s conversations about video monetization date back to February 2021.

APG was looking for a video editing and production solution for editorial coverage – a tool its newsrooms could use in its more than 100 markets – when they sat down for a demonstration of the video creation platform based on the cloud, Wochit.

It was one of those “lightbulb moments,” he recalls.

With additional app licenses and creative talent already in-house, APG could offer video production services to clients without adding additional staff, Martoccia noted. One of the first things they did was ask their graphic designers across the organization who wanted to work on creative videos, and “a lot of people raised their hands,” he recalls.

The training on the solution lasted about an hour. In addition to the graphic designers who participated, APG also trained its advertising team, so that they were fully familiar with the capabilities and possibilities. 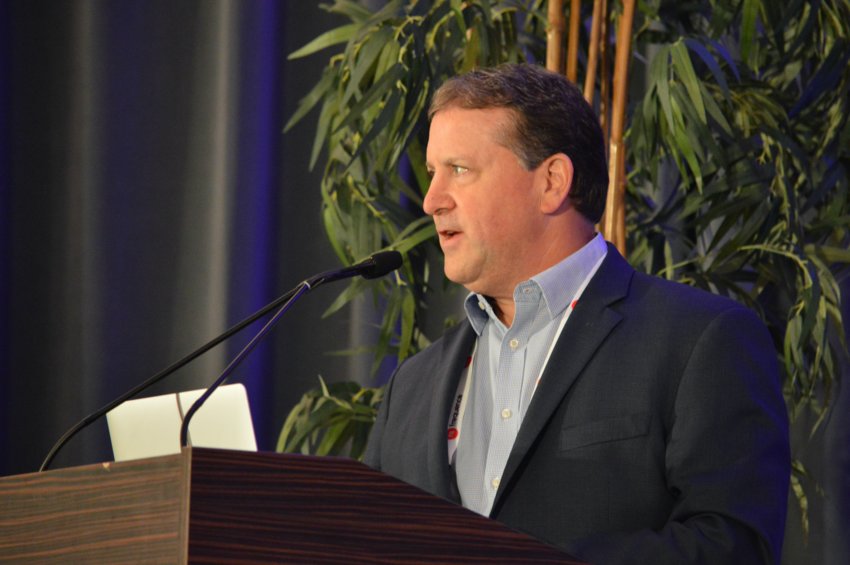 Mike Martoccia, Vice President, Digital, Adams Publishing Group (APG), moderated a session on video monetization at the 2022 Megaconference in Orlando, Florida. He started the session by asking the audience if they started the year with a “video monetization strategy”. Very few participants raised their hands, but that may soon change.

“We started with six test markets in April last year,” Martoccia said. The initiative has been so successful that APG has rolled it out to all of its markets.

Video is now a “conversation starter” for its ad sales teams. “We ask our clients, ‘What is your video strategy’, and often they don’t have one, so this is an opportunity for us to show them some examples of videos we’ve produced for other companies. All we ask of them is 10-12 assets — photos of their products, services, or businesses. Everyone has that, but we have access to over a billion Getty Images if not not the case.

“Then we ask them what they want the script to say, what the message should be in the 30-second spot, and whether they would like a voice-over or background music. In about seven to 10 days, our artists produce the first proof, to which clients can then request changes before we make a final edit,” explained Martoccia.

“Once we’ve completed the video, we give it to the business owner and immediately ask them to share it on their website and social media. We also ask them where they want us to post the ad for earn more revenue and more customers. Because if they just share it with their regular audience, via social media or their websites, you’re not going to gain new customers that way, or increase your revenue We can provide it to programmatic audiences for them,” he explained.

“The cool thing about video marketing is that there are so many ways or places you can strategically distribute it,” he added. If the news publisher is retained for serving video ads, this can also provide important insights to the customer, Martoccia engagement analysis estimated that around 10% of its customers, so far, only wanted the video production service, with 90% relying on APG for distribution.

Customers are encouraged to contract with APG for a campaign of at least three months, although most sign for 6 to 12 months, Martoccia reported.

“We recommend that a business owner these days needs to release a fresh and relevant video at least once a month,” he said.

One of the things they’ve discovered in the first full year of production is that there’s a “sweet spot” in pricing for most of their customer base. Small and medium-sized businesses, he said, can’t invest thousands of dollars each month in a new video, but few mind a marketing investment of $500 a month, and for that price APG can provide a effective and engaging product, he said. This also means a profit margin of around 40% for APG.

Clients looking for longer videos and something more personalized can hire APG’s in-house agency, The High Road Agency, for a more sophisticated video that can cost between $2,500 and $5,000 to produce. . Yet those customers represent a tiny fraction of customers — around 1%, he estimated.

Asked about “copyright” or who “owns” the video once completed, Martoccia explained that the client technically owns its assets, but that APG “owns the editing rights to this video.”

“If you want to make changes or future changes, we reserve the right to own that opportunity,” he said.

APG has now produced video ads for a range of clients – many in service industries, like local restaurants, and in product categories too, like furniture and home decor stores.

“We produced videos for local judges and sheriff candidates, but also for candidates for the House of Representatives or the United States Senate,” he said. “They have a lot of money to spend, so we’ve really monetized the political category this year.”

E&P asked Martoccia about his experiences traveling across the country and talking with his peers — particularly if he’s come across other news outlets that produce videos with a revenue goal. “I was trying to think of another company that might do well with video, but none came to mind.”