The point of naming and quantifying generations – baby boomers, Gen X, Millennials and now Gen Z – is to better understand them, to put their collective experiences in the world into context. For news publishers, understanding generational nuances is essential for effective marketing and growing audiences. An ongoing challenge they face is how best to attract young readers, listeners and viewers. The ideal, of course, is to appeal to young audiences, keeping them engaged and informed, proving the news publisher’s value proposition day in and day out. The goal is to gain trust so that the relationship between the source of information and the subscriber is galvanized and lasting.

The Pew Research Center defines Generation Z as those born in 1997 and later, citing 1996 as “a significant break between Millennials and Generation Z for a number of reasons, including key political, economic, and social factors that define the formative years of the millennial generation.” This is an “always on” generation, according to Pew, referring to Gen Z’s relationship with technology and social media.

Generation Z is also a generation that was born into adversity. Although they seemed destined to inherit a strong economy and opportunity, the COVID-19 pandemic has upended those notions, reported Kim Park and Ruth Igielnick of the Pew Research Center in their 2020 report, “On the cusp of Adulthood and Facing an Uncertain Future: What We Know about Generation Z So Far A March 2020 Pew Research Center survey shockingly reported that half – 50% – of Gen Zers (aged 18-23) said they or someone in their household lost their job or took a pay cut as a result of the pandemic.

But this generation – notably more diverse than the previous ones – still aspires. Pew Research reports, “They are less likely to drop out of high school and more likely to be enrolled in college. Among 18- to 21-year-olds no longer in high school in 2018, 57% were enrolled in a two- or four-year college. This compares to 52% among Millennials in 2003 and 43% among Gen Xers in 1987.”

Gen Z also has a different perspective on the world’s problems and the government’s role in solving them. “Seven in 10 Gen Zers say the government should be doing more to solve problems, while 29% say the government is doing too many things that are best left to businesses and individuals,” Park and igielnick.

Gen Z is connected, digitally savvy, and preoccupied with social and political issues, but what does this generation want or demand from an information provider? What directs them to a source of information? What motivates them to pay for news content? What does it take to gain their trust?

News for the next generation

Much of what we’ve learned about Gen Z from Pew Research findings came to light in a recent study by the News Media Alliance (NMA): “The Key to Gen Z: Insights and Ideas for build lasting relationships. The NMA commissioned Springboard Market Research to study 424 American adults, aged 18 to 29, to better understand the relationship that “twenties” have with the news.

“About half of Gen Z consumers (51%) say they read the news daily,” NMA staff said in a summary of the findings. “The majority (60%) say they would likely use local news products, while a third (33%) say they would be likely to pay for local news. Unsurprisingly, 20-somethings prefer getting information online through social media apps and web searches rather than print. They want to “snack” on news that has been personalized to their preferences throughout the day. Incentives for subscribing to local news outlets include free trials and special content aimed at them.

Newsletters are a way for news publishers to create a curated and personalized news experience for Gen Z subscribers. In recent years, publishers like The Economist, The New Yorker, and The Washington Post have launched newsletters related to climate change and the environment.

Social media plays an extremely important role in how Gen Z searches for or is exposed to news. The NMA study revealed certain patterns they turn to and at what times of the day. For example, 42% of Gen Z respondents said they use Facebook in the morning and move on to other social platforms later in the day.

This generation also has a preference for “striking visuals, videos, and an easy-to-navigate app and site,” they told interviewers.

The study also revealed how important it is for Gen Z news consumers to see themselves represented in news coverage and in coverage of the issues that matter most to them: social justice, civil rights, racial discrimination, environment/climate change, finance and health. and well-being.

Telling Gen Z audiences depends on meeting them where they are, the NMA surmised. Podcasts are a good example. News publishers have capitalized on audio as a new way to tell stories to on-the-go audiences. Some have created podcasts on topics important to Gen Z listeners — climate, social justice, and practical, fact-based reporting, like the Coronavirus Fact vs. CNN fiction.

“For local news, they are interested in weather, events/arts and entertainment, and other news about their city,” NMA staff explained. 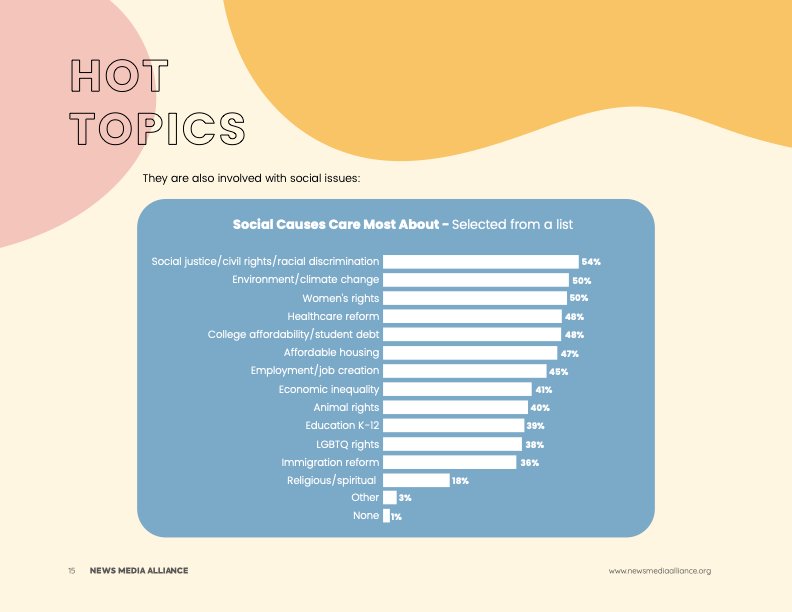 This knowledge – about how Gen Z wants to discover the news and topics most important to them – allows news publishers to invest smartly in reaching them.

“The study findings are exciting in terms of the opportunities they present for news outlets,” Rebecca Frank, NMA’s vice president of research and insights, explained in the summary. “Gen Z emphasizes credible, accurate and factual information, which is exactly what our members provide. Media outlets that apply the insights in this report will have a distinct advantage over other content providers, as the quality of their content already meets Gen Z expectations.”

The full study is available to NMA’s more than 2,000 member news organizations.

Gretchen A. Peck is editor-in-chief of Editor & Publisher. She has reported for E&P since 2010 and welcomes comments at [email protected]