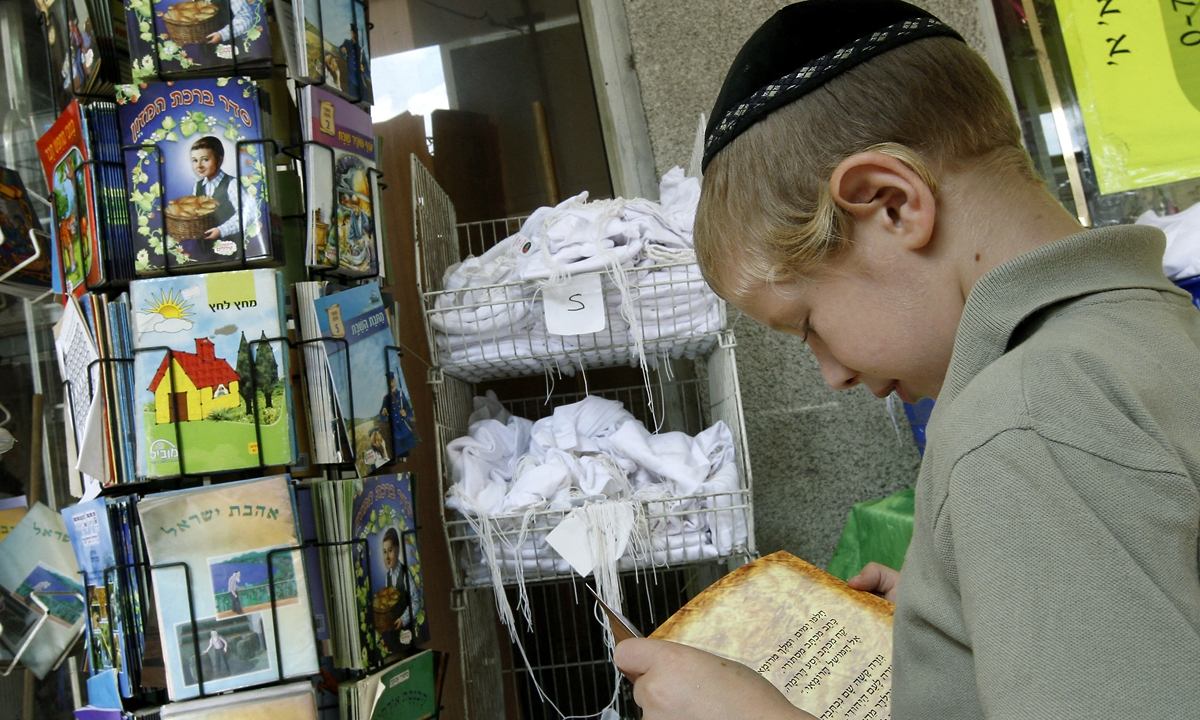 A young boy reads a comic book at a store in the Israeli town of Bnei Brak, near Tel Aviv, October 29, 2009. Photo: AFP

An artistically designed blackboard with the inscription “Ni hao”, which means “Hello” in Chinese, welcomes each guest to Pierre Lavi’s house in Jerusalem.

Next on the cabinet was the certificate and trophy that Lavi received in 2020 as one of 15 winners of the 14th China Special Book Prize.

As an Israeli publisher, Lavi has been dedicated to translating Chinese books into Hebrew since 2016. Topics range from China’s development and economic policies to poems, novels and textbooks.

Lavi began reading books about China as a child in the 1970s, when cultural exchange between China and Israel was still rare. Over the books, he becomes more and more fascinated by the oriental country steeped in history.

The lack of Hebrew books more relevant to China proved to be a catalyst for his professional exploration as an adult. After writing several books in his early years, he established Lavi Publishing House in 2019 to expand and deepen his ties with China in the pages of books.

“Building ties with China in this way has fulfilled my childhood dream,” he said.

Now in his late 50s, the modern China Lavi witnesses is completely different from what he learned in his youth from books. In 2019, he traveled to Chengdu, capital of southwest China’s Sichuan province, where he tasted exotic hot pot and saw adorable pandas for the first time.

Besides cultural symbols, Lavi said he was more amazed by the modern infrastructure, convenient public services and rapid development of science and technology even in a landlocked Chinese city. It was then that the Israeli publisher realized the real imperative of strongly promoting mutual understanding between the two peoples.

“My philosophy is that culture, especially books, is an important bridge between people. You may not be able to speak each other’s language or understand each other’s culture, but reading can bridge that gap,” Lavi told Xinhua news agency.

In addition to translating Chinese books into Hebrew, Lavi has also co-authored two books with his daughter, Shira Wants a Rock from the Moon and Shira Wants to Win the Nobel Prize, both of which have been published in Chinese by China’s Commercial Press. .

Considering the distance between China and the Middle East, Lavi stressed the special importance of reducing misunderstandings between people on both sides.

“You may not know yourself perfectly, or be exactly the same, but you can find a lot of inspiration by reading between the lines.”

Noting that what he had achieved was “far from enough,” the Israeli said he looked forward to cooperating with more Chinese partners and mobilizing more talented Chinese-Hebrew translators to advance exchanges cultural.

He has set his plans in motion by facilitating the construction of a Chinese cultural library and developing a television show, in which he will interview Israelis and ask them to introduce Israeli culture and tourism to Chinese audiences.

“I have so many ideas, but I am always looking for the real and good partners who can bring the two nations together,” he said, adding that from a historical perspective, the Chinese and the Jews share many similarities, as they both suffered greatly but are full of wisdom.

“In many aspects, we cherish Chinese wisdom. When I first published the Chinese book, I was deeply attached to this belief,” he said.