Former journalist Mike Reilley teaches data and digital journalism at the University of Illinois at Chicago. He is a trainer at the Society of Professional Journalists and owns a digital consulting firm, Penny Press Digital LLC.

You’d have to be a Luddite or a desert islander to not have experience with Google Maps. On smartphones, it reigns as the app of choice for planning routes and finding local destinations. Google reports that 154.4 million people use the app each month.

Mike Reilley is a former journalist who teaches visual journalism at the University of Illinois at Chicago. He also founded the Journalist’s Toolbox, acquired by the Society of Professional Journalists (SPJ) in 2007. As part of his role, he teaches journalists how to effectively leverage digital tools, including Google’s My Maps.

This tool allows journalists to create layered maps by importing shapefiles and overlaying them with data imported from a spreadsheet of less than 1,000 rows.

One of the newspapers he submitted to My Maps, the Santa Barbara Independent, constructed a layered map with local mudslide evacuation areas and locations of Montecito mudslide victims. The newspaper was then able to recount the scale of the devastation and how 17 of the 23 victims – aged between 2 and 89 – were in areas not designated as evacuation zones.

Reilley quoted Joel Currier and Walker Moskop of the St. Louis Post-Dispatch, who used Google My Maps to identify, track and archive homicide-related data in the city. It’s an interactive map that not only visually identifies the location of the crime, but also the type of crime – whether it’s a shooting, police-involved shooting, child abuse, children, vehicles, stabbings, arson, asphyxiation, beatings and even cases considered “justified homicide”. Each specific point on the map can be expanded upon and a link takes readers to a deeper story about that victim and that particular homicide case. The newspaper produces an annual version of the map. 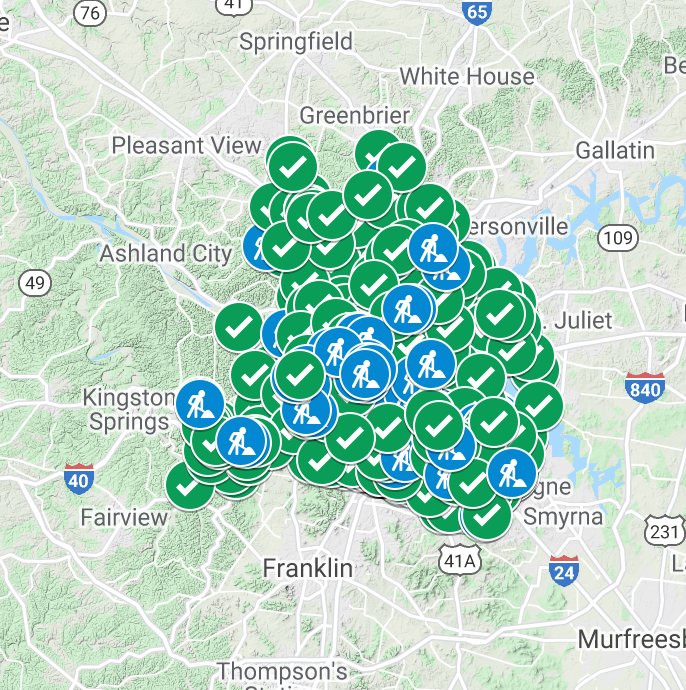 The Nashville Tennessean used Google’s My Maps to locate potholes around town and the progress of repairs.

In Nashville, Tennessean, the newsroom used Google’s My Maps to create a multimedia story about potholes around town and the progress of repairs. The Pensacola News Journal did the same, tracking road repairs in Santa Rosa County. In Florida, at the Tallahassee Democrat, reporter Wayne McGahee III produced a map of the 2020 Florida State Football Recruiting List, showing where each of the potential players came from — state by state and across the country. 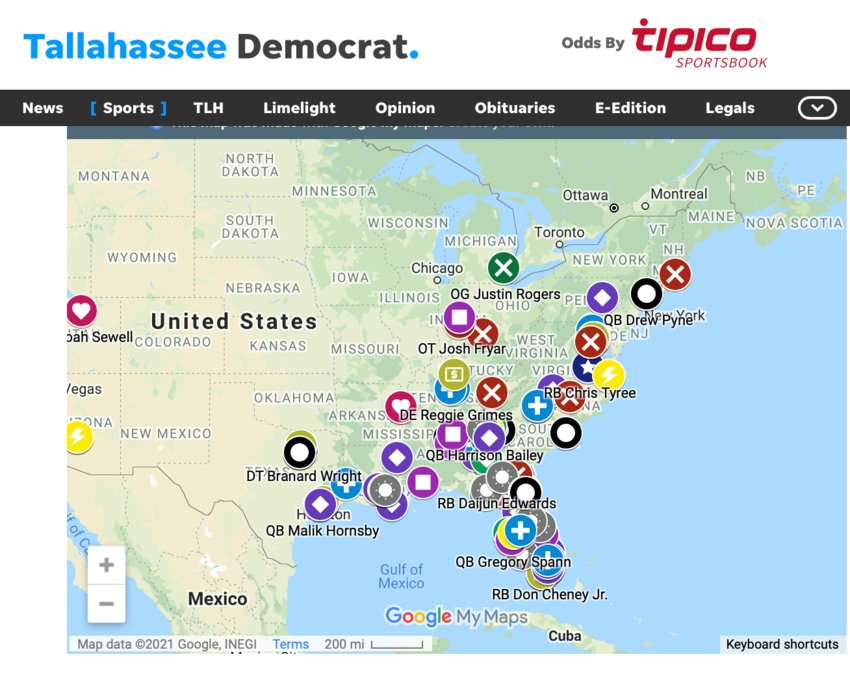 The Tallahassee Democrat newsroom was able to create a map of the football program’s recruits, state by state and across the country.

Reilley has produced a quick how-to video in which he demonstrates how to import shapefiles in .KML and .KMZ formats and then overlay spreadsheet data on them. In the video, he quickly maps potholes in distinctive neighborhoods across the city of Chicago.

Journalists can also add additional media, such as photos or videos.

Naming your map is key, Reilley explains in the video, because people will likely find your map two ways: when it’s embedded in your story or through a Google search. The app has the option to make the map visible only to people who have the link, or open for public browsing.

Another pro tip: label each layer.

“There are thousands of stories to find in datasets on your city, county, state and federal data portals,” Reilley said.

Check out JournalistsToolbox.org for more tips and how-tos from Reilley and SPJ.

Gretchen A. Peck is a freelance journalist who has reported on publishing and journalism for more than two decades. She began her journalism career covering city government at a suburban Philadelphia daily and served as an editor/editorial director for a magazine publisher. She has been writing for Editor & Publisher since 2010 and is editor-in-chief. She welcomes comments and advice at [email protected]