See the editor Wes Smith began his career with The County Press 50 years ago this summer. He is pictured here typing a copy of one of his first articles published in 1972.

LAP – As the first guests arrived at the newly opened Pine Knob Theater to hear David Cassidy perform, Wes Smith set foot in The county press for what turned out to be the start of a long and rewarding career.

It is fitting that the concert hall opening and Smith’s career share an anniversary as Smith is a music lover, although as a high school student, not a fan of Cassidy. He assumes he went to Pine Knob at some point that first summer.

It was 1972 and Smith, who was only 17, was already climbing the press ladder, arriving at The county press from the Almont Times-Herald and Dryden News.

“I started writing high school news and sports for the Almont Times-Herald when I was 15,” said Smith, who grew up in Dryden. “Tom Sadler, Sr. was owner, publisher, editor, reporter, photographer, advertising manager, typesetter and pager for this newspaper which included the Dryden News, Capac Journal and Emmett Express. Tom showed me what a basic community newspaper was. He would cover a village council or school board meeting, sell advertisements on his way to and from the meeting, return to the office, write the story, develop the photos, set the type, lay out the pages and the sent to the press, all in one working day.” 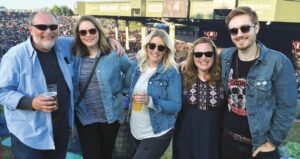 Wes and his children Elaine, Tricia, Emily and Adam attend a Steely Dan show at Pine Knob a few years ago.

The press where Sadler sent his newspaper to print was The Lapeer County Press’ commercial printing division known as Webco. When Smith got his driver’s license he was assigned to deliver the pages of the Times-Herald to Lapeer where he oversaw the printing of the newspapers and returned them to Almont for posting.

“I was absolutely transfixed watching the newspapers roll out of the big press. I still am today when I see that big beast churning out newspapers at 40,000 copies an hour. When Smith’s family moved to Lapeer in the spring of 1972, Sadler helped him land a summer job at The Lapeer County Press. “I guess you could say that move and job set the stage for the rest of my life,” Smith said.

Smith was first hired at The Lapeer County Press to insert and distribute newspapers. “I was hired to drive a delivery van to drop off newspapers at newsstands and post offices in North County because Bob Myers’ son had destroyed three company vehicles on that road in a few weeks in. Myers had banned his son from driving company vehicles, so when I showed up looking for a job, production manager Jim Hawkins gave me a chance and hired me. I was on top of the world I was working for The county press!

Smith was determined to make the most of the opportunity. “The newspaper was only published once a week and then delivered on Wednesdays. When I showed up for work the next day, Hawkins said, “Hey, silly, it’s a weekly.” Come back next Wednesday. I persuaded him since I was there that there must be something I could do. He gave me a series of menial and repetitive tasks, which I stuck to all day without complaining. He told me to come back the next day and that was the start of a long career.

In his 50 years with The county press Smith has done nearly every job, from selling advertising to writing to graphic design, organizing events, taking out the trash and everything in between.

In 1974 he moved to the printing side of the business and started working at Webco Press. In 1999, Smith bought this company, which he says is one of the most defining days of his career.

“Those two days have stuck in my mind as important milestones in my career,” Smith said. “As any boat owner will tell you, the two best days of your life are the day you buy your boat and the day you sell your boat. I understood that feeling well when I was a business owner.

Smith was working at Michigan Web Press in 2011 when Burrough approached him to become editor of the growing View Newspaper Group.

Smith Credits The county press with not only the launch of his career, but his family. He met his wife Christie at The county press shortly after being hired. The two were married in 1978. (By the way, she was at Pine Knob Cassidy’s inaugural concert.) “Chris comes from a family of journalists and understands what that life is. We worked side by side for many of those years. Our only argument about work was who would leave work first to replace the babysitter. Chris has totally supported me in every way throughout my career. Without his support and encouragement, I would not have achieved my goals or sustained this career that I love so much,” said Smith.

While Smith has plenty of professional accomplishments to brag about, that’s not his style. He said he is most proud of the fact that at some point during his tenure as publisher, three of his four adult children worked with him at the company. “And my fourth child provided free legal advice for our paperwork,” Smith added with a chuckle. Today, his daughter Emily Caswell continues to be the brand manager at View Newspaper Group.

Perhaps the best part of Smith’s 50 years at The county press is that he will continue to serve in his role as editor.

“Some may think that celebrating 50 years is a way to announce an impending retirement,” Smith said, “but I’m just celebrating. I’m not done with journalism yet.

Letter from the Editor: New Experiences